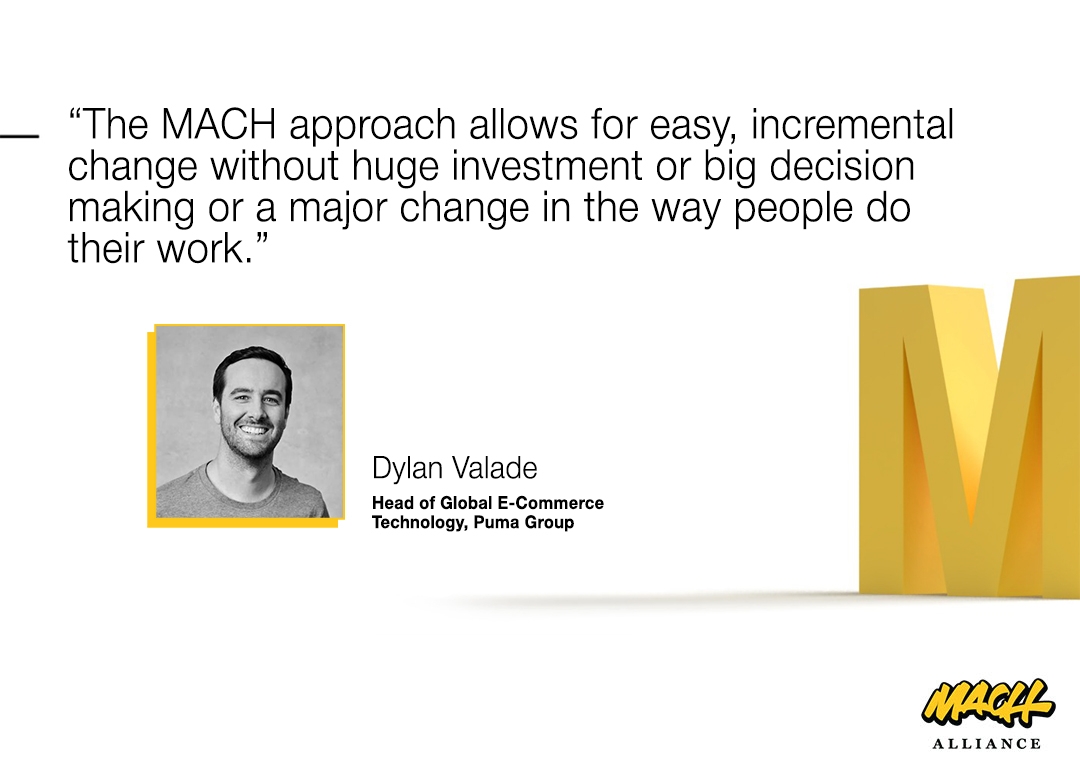 As cloud tools gained traction among individual users, proving their value, companies started to change their tune. “Dropbox and Google Cloud and all these other tools started emerging and becoming usable for business, and the more we leaned into them the more success we had,” says Dylan.

These lightweight technologies offered a lot of benefit, but businesses were missing a critical piece of the puzzle - someone to call when there was a question. “Usually a company wants that hand holding, they want service.” says Dylan, “So we filled that gap by providing consulting for all of these new cloud-based offerings.”

This ultimately led to him working with PUMA and when the sportswear brand asked him to join the team full-time, he hopped on a plane from Michigan to Germany to lead their global eCommerce division.

Dylan recently sat down with us to talk about PUMA’s cloud-first approach to eCommerce, the benefits of a composable architecture, and his new role as a MACH Alliance Ambassador.

“What I would like to see is that as soon as somebody has an idea they can have it live, either in production or in a production-like environment, within a day or two’.” says Dylan, “There should be no reason to have a good idea, that everyone is supportive of, and not be able to preview or prototype it the same week.”

When he joined PUMA in 2016, Dylan found that the legacy technology wasn’t enabling this kind of speed. Some of the monolithic platforms being used did make sense for their area of business, and many still exist in the company’s stack, but the lack of flexible APIs was holding the team back when it came to customer experience.

“What happens with the monolith structure is that you struggle to keep pace with the change of new frontend experiences that become available.” says Dylan, “When your backend and frontend are one in the same, it makes it difficult to safely release as much code as you’re ready to put into production because you can’t tell where a button change on the frontend might affect a price upload on the backend.”

“We couldn’t get good ideas live because we were so focused on solving these problems.” says Dylan.

The tightly coupled code, as well as lack of transparency around who had made configuration changes in which environments, slowed things down to the point where changes were taking months to go live.

“It’s hard to keep the momentum going when it takes that long,” he says. “Ideas are appropriate for the time you have them, when there is a need right now and solving it would give an immediate benefit, even if that benefit is simply your own motivation or more job satisfaction for the people around you. That will build and build, and that comradery is what allows companies to take bigger and bigger risks.”

“If you’re stuck playing it safe all the time, others are accelerating what you're slowing down.” warns Dylan.

To speed up their process of getting ideas live, Dylan and his team at PUMA turned to the cloud. Specifically, to SaaS (software-as-a-service) tools that combined the convenience of cloud paired with enterprise-level support.

“In many cases we work with vendors who have built on top of the cloud-based infrastructure to provide something they can service.” explains Dylan, “Even if it’s not theirs all the way down to the metal, they understand how to use it, are professional and empathetic, and we can call them with a problem to get it solved quickly.”

Typically designed to work with single sign on, these SaaS tools allow companies to quickly and securely turn on new business functionality with minimal development effort. “Ultimately,” says Dylan, “if you can buy it today instead of building it, you’re likely to get to market faster.”

PUMA has transitioned key parts of their technology stack to centrally managed cloud services. Adopting the SaaS and API versions of tools from vendors they were already working with, like Salesforce and Atlassian, as well as moving documentation, communication, and project management over to shared cloud-based tools everyone can access.

“With the on-premise or self-hosted versions of these softwares we had to do all the maintenance, and often IT and our agencies ended up having to work on that instead of on new functionalities.” says Dylan, discussing why the vendor-hosted SaaS model has become a key part of PUMA’s digital strategy. “It does make me feel more comfortable knowing there’s a whole network operations team on the other side, with security and monitoring, and data centers that aren’t likely to have physical penetration. Those things make life easier and I sleep better.”

Along with removing the maintenance barrier, taking a cloud-first approach is helping PUMA move faster by opening up new ways to collaborate across global teams.

“It’s been an evolution of, first, getting all the pieces we have into the cloud and, then, inviting people in to talk to each other who normally don’t work together unless there’s a problem.” says Dylan. “Now we’re able to share and learn all the time, to show the work we’ve done and what we’re planning. Since it’s all cloud-based, it’s easy to invite others and share across all the different devices people are using. With the cloud services taking care of standard access management and authentication we can move fast.”

Incremental Change is Most Likely to Succeed

Compared to a traditional on-premise platform, which aims to be a one-stop-shop, many of today’s SaaS tools focus on providing services for a specific area and are built with MACH principles (microservices, API-first, cloud-native, headless) to make it easy to integrate these services with other tools.

“Buying things à la carte just makes sense.” says Dylan, “When you go into a home goods store you don’t buy a new home, you buy a new couch or new mirror, and to be able to have a similar purchasing decision with reliable technology components is pretty amazing.”

This composable approach to commerce architecture also paves the way for smoother updates in the future. As Dylan explains, it’s a lot easier to say “we just want to swap out this element” than to say “we would like to wipe out six years worth of investment so we can put in this new tool just to try it.”

The ability to change one element at a time is also a more successful approach to user adoption. Adding one new functionality often only affects a small part of the business process, so people don’t have to upend their entire way of working just to test out a new feature.

“The MACH approach allows for easy, incremental change without huge investment or big decision making or a major change in the way people do their work.” says Dylan.

Determining if Composable Architecture is the Right Move

Over his career, Dylan has helped people in many different industries figure out which tools would offer the biggest benefit to business. Part of his interest in joining the MACH Alliance is to help companies better understand the value of a composable approach, what the journey would look like, and how to determine if it’s a good fit for their business.

“There are reasons not to do all of the innovative, modular things that are prescribed here all of the time,” says Dylan, ”but in general this approach works, we’ve proven that it works, and not enough people understand how to use it well or how to adopt it.”

“If you take a step back and look at what you have, consider the language your people use and identify what you’ve been successful in so far, you can determine if you’re either ready or you’re not.” says Dylan.

“With the modularity of MACH, the architect of your solution becomes the one responsible for making sure all the pieces work together in tandem.” says Dylan, “That architect might be internal but it’s often a consultant or vendor doing it on your behalf or training your team, but if your company doesn’t have someone to take on that architecture responsibility you will struggle to adopt it.”

If your team does have the skills to take on responsibility for a composable architecture, there’s still the age-old standard of ‘if it ain’t broke, don’t fix it’.

“If your teams are honestly satisfied with what they have, they are happy, they are successful, and your technology isn’t holding you back then stick with what you’ve got.” says Dylan.

“If you can understand how to break your organization up into pieces that fit into the MACH principles, you can adopt this architecture.” says Dylan. “If you have noticed that you’re not deploying faster than weekly, but are already at a weekly cadence, you’re probably ready. If you have applications that are failing, or are constantly down with no one to support them, then it’s time to throw those away and you’re ready now because what you have doesn’t work and it’s time to let it go.”

“If you have an acquisition model where you acquire businesses and bring them into the mothership, that’s a good case for doing this.” says Dylan, “If the mothership is flexible, even if the acquired technology isn’t, business can still merge quickly and that’s where APIs can make a big difference.”

“If you’ve got an international organization you need these things. You have to be able to move data around the world easily and securely and you can’t afford to lose it in some data center, or someone’s hard drive, so it’s time to look at data storage and sources of truth differently.” says Dylan.

And for large enterprises in particular, the collaborative business relationship offered by many SaaS vendors can be a major driver to make the change. As Dylan explains, “When you have thousands of people all needing to connect to the same services, all needing to be secured and authenticated in the same way, it makes sense to invest in a partnership that’s capable of helping you serve a large number of people consistently from a central service desk. The partnership means if we fail we fail together but more often when you make a big commitment to each other you win and win together.”

The MACH Alliance is very excited to welcome Dylan as a MACH Alliance Ambassador. Our Ambassadors are a carefully selected group of business and technology experts with a wide range of experience across industries and backgrounds. Passionate about the benefits a modern architecture can bring to an enterprise, our Ambassadors have graciously committed their time to support the mission of the MACH Alliance by writing, speaking, and serving as subject matter experts to help empower companies to go MACH.

If you’re interested in learning more about a MACH approach, and understanding if it’s right for your business, you’re invited to reach out to Dylan or get in touch with us at info@machalliance.org to be matched with the MACH Alliance Ambassador most relevant to you.